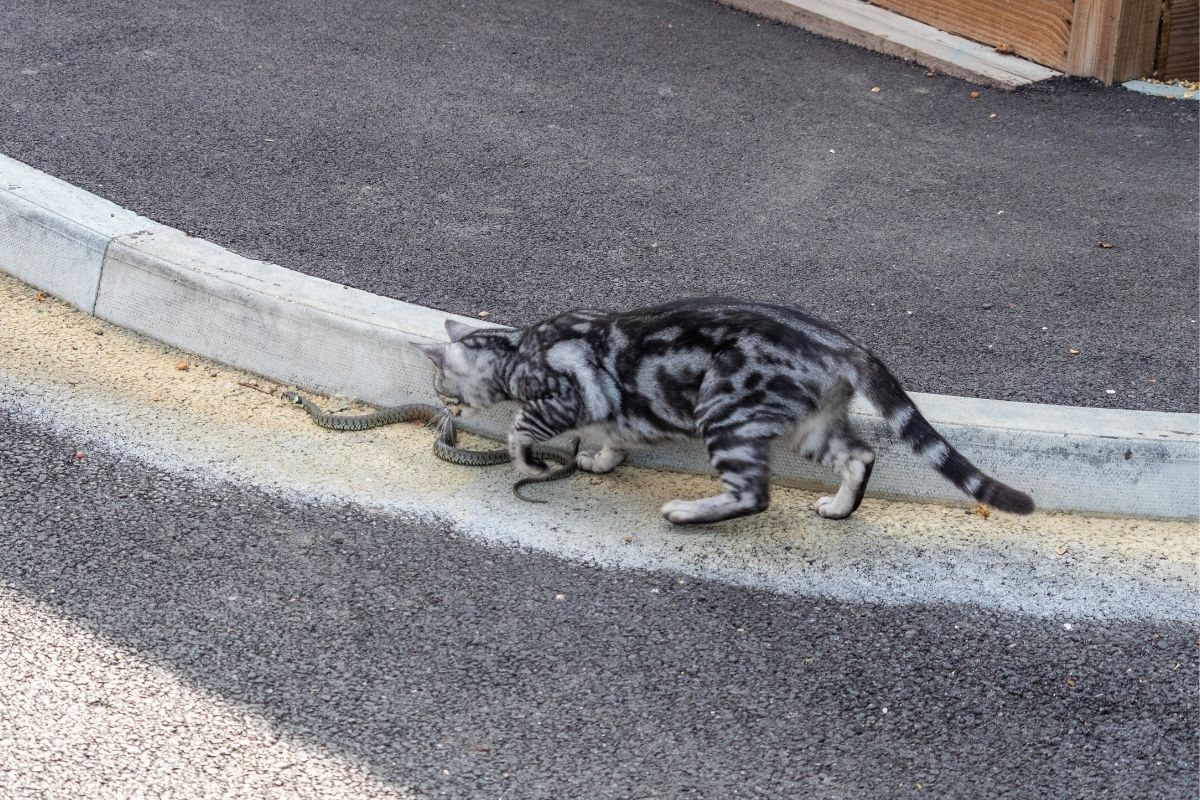 Snakes are often portrayed as the scariest animal in nature. They’re usually seen slithering about, coiled up, and ready to strike at any moment.

But snakes are not that dangerous, actually, and the fluffy cat you have purring on your lap right now is probably more dangerous than the snake.

Cats are incredible predators, and the cat family, in general, are all excellent hunters, and snakes know that.

So, are snakes afraid of cats? Snakes are afraid of cats because cats chase, hunt, kill, and even eat snakes. Scientists discovered that the scents of snakes intrigue cats and spark their interest and trigger their predatory instincts, and cats are also attracted to the smooth slithering motion of snakes.

However, not all cats are born alike, of course, and how your cat will react to a snake will depend on many factors.

In this article, I’m going to try to answer as many questions as I can about what happens in Snakes vs cats interactions and what to expect, and I’ll, of course, cover how to keep your cat safe from snakes, so keep reading…

Are Snakes Afraid of Cats?

Snakes have a bad reputation for being aggressive and frightening, but this does not imply they are unable to be frightened of other animals. Snakes are usually fearful of large predators like dogs and cats.

Snakes are particularly wary of cats, and they will try to avoid them or flee the scene when they see a cat. A snake may only strike a cat if the cat corners it.

Why are snakes afraid of cats?

In certain regions, such as the Caribbean, feral cats are natural predators of certain species of snakes.

Because of their natural predatory instincts, even domestic cats are likely to hunt snakes that they discover around their homes.

Because of this, many snakes will leave if they detect a cat or a bigger predator.

However, we can’t promise that every snake will be scared of cats, so obtaining a cat just to scare snakes away may not always work because cats can have different attitudes towards snakes depending on their personalities.

What happens when a cat sees a snake?

Snakes will either try to flee or defend themselves when encountering cats. They may do this in a variety of ways, such as:

Cats do attack snakes. Cats are quite the hunters and snakes are definitely on their menu, so they look at them as food rather than scary animals like we do. Studies have also confirmed that the scents of snake in cats trigger their predatory responses.

Some cats may attack snakes if they feel threatened or see the snake as prey. Domestic cats are typically not as fast as wildcats, so a domestic cat is unlikely to kill a snake, but it could injure it.

If you have both a cat and a snake in your home, chances are that the snake will eventually disappear because it will be constantly on the run or in hiding.

If your cat is hunting and killing snakes, it’s best to keep the cat inside. You can also try to frighten your cat with loud noises or spray bottles so that it associates snakes with something unpleasant.

Why do cats attack snakes?

Cats attack snakes because snakes are prey in the snake’s eyes. Plain and simple. Cats also love to hunt, whether to eat or just for fun.

The way snakes move also triggers the cat’s curiosity, and since it’s unlike anything else that cats are used to, the cat may even perceive the snake as a threat that should be eliminated.

Snakes are surprisingly good at killing snakes. Not only are cats one of the very few animals that can match the snake’s neck-breaking striking speed, but cats are also smart hunters and know exactly how and where to hit the snake for a fatal blow.

Some cat owners living in rural areas have also reported that their cats will occasionally wander around the property and they would find a few dead snakes in its wake, or they would find the cat snacking on a snake it has killed in the backyard.

Are snakes dangerous on cats?

Yes, snakes are dangerous on cats, but not always for the reasons you are thinking of.

While snakes are dangerous to cats because of their venom and the harm they can do with their bites, another danger that is often not thought of is the danger of transmitting bacterial and viral infections to the cats whether through bites or when the cat ingests the snake.

Snakes love damp, dark places, they thrive in dirty environments, but you know what else thrives in the same environments? diseases. Snakes can carry dangerous infections

How to keep your cat safe from snakes?

You may take measures to avoid snakes on your own property rather than risking your cat being injured by one or becoming ill after eating one. In my view, this is less hazardous than hoping your cat can deal with the snakes or even kill them.

Maintain your lawn throughout the summer as it grows. This will deter snakes. What is the reason? Long grass gives snakes the concealment they enjoy.

When grass is limited, snakes cannot travel freely without attracting attention from predators. It will also help you identify them before putting your foot on one!

Snakes are attracted to water, so if you have any more accessible water sources on your property, get rid of them. This implies cleaning up any damp places, such as tarps where water might accumulate or a children’s paddling pool.

Maintain the Yard as Clean As possible

Snakes like to hang out in filthy areas, and unclean conditions attract them. If you have garbage strewn about your yard, a snake could enter it. Snakes like to hide in piles of wood.

Snakes and rodents are attracted to messes, particularly food or animal feces. This indicates that, if you’re feeding your cat outside, for some reason, the food bowls should be cleaned and replaced on a regular basis. The same may also be said for bird feeders.

Rats and mice may enter your yard as a result of the rubbish, enticing snakes to hunt and consume them.

Perches may be used to attract hawks and owls into an area, which helps keep snake numbers in check. Poles should be visible from the yard and the neighboring territory so that the hawk or owl has a clear view of both.

To keep snakes out of your home, sidewalks, and foundations, fill gaps and fissures.

If you don’t want to do this work yourself, why not hire someone to conduct an energy audit on your home? The findings of an energy audit may indicate air gaps and fissures that allow cold air to escape the property – these same flaws and crevices can be used by snakes and other small animals.

Can cats keep snakes away?

Some cats can keep snakes away because most snakes are afraid of cats since cats do chase, hunt, and kill snakes, but you should not depend on your house cat to keep the snake away.

Some cats will be fearful of snakes and some larger snakes can kill and even eat cats, so you should instead protect your house from snakes to make sure your cat (and the rest of your family) is safe from snakes.

Do Cats get along with snakes?

Cats do not get along with snakes, and if you are planning on keeping both a cat and a pet snake in your house, you should isolate the snake in a different part of the house or a separate room where the cat can’t get into.

Are Snakes friendly with cats?

Snakes are not friendly with cats, and you should never let your cat get close to a snake or even touch one.

Cats can smell snakes, and since cats are predators, they will usually be drawn to the scent of a snake.