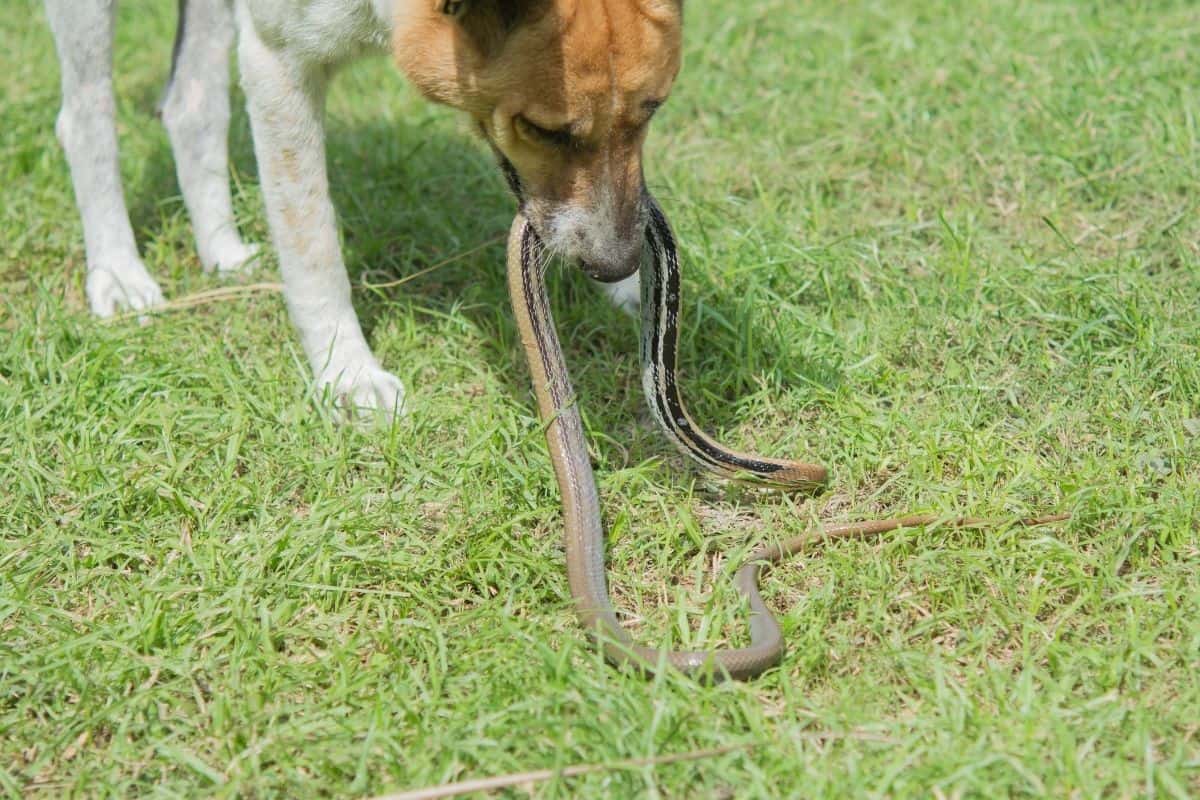 There are more than 3,000 species of snakes in the world, and you can find snakes on every continent on the planet with the exception of very cold places like Antarctica and Greenland. About 600 of those species are venomous, but only about 200 of these are venomous enough to kill a person.

However, Snakes exist in the US, and they do not exactly go well with dogs. Dogs have a high prey drive and they will instinctively hunt and even kill smaller animals, and this can include snakes.

So, are snakes afraid of dogs? Snakes are afraid of Dogs. Snakes will try to avoid places with dogs, especially larger dogs, and will not bite or attack a dog unless it’s cornered, attacked, or provoked to bite. Dogs can and do kill snakes, but snake bites can be fatal to dogs as well, so it’s best to avoid the encounter altogether.

Snakes do get a bad reputation, though. They do not attack because they are evil or because it’s fun, and they play a crucial role in the balance of our ecosystem.

To learn why snakes are important and how to keep yourself, your family, and your dog safe from snakes, keep reading.

Why Snakes are Afraid of Dogs

It’s a secretive animal that moves silently, doesn’t speak or communicate visually or audibly, so they are basically everything a dog is not.

Dogs are also not on the menu of snakes, but snakes are on the menu of dogs, which is very expansive and includes basically anything the dog can shove in their mouth.

Snakes rarely approach dogs, but a dog will approach a snake almost every time it senses one.

In an encounter between a dog and a snake, the snake will almost always lose. It may bite the dog, but even if it won the battle with the dog, the snake will either be killed by humans or at least tracked, hunted down, and removed from its habitat.

Basically, snakes are afraid of dogs because dogs are bad news for snakes. Dogs may attack snakes, kill them, eat them, or signal to humans their presence so that the humans will come and attack the snakes or remove them from their habitat. In an encounter with a dog, the snake will almost always end up losing.

And yes, dogs do eat snakes. You can learn why dogs eat snakes here.

Snakes do not attack dogs unprovoked and will only attack the dog if the snake is threatened, cornered, or provoked, but dogs are another story.

Dogs can be aggressive towards snakes, and even though they do not attack them for fun or because it’s their nature to do so, the result of an encounter between a snake and a dog will almost always end up with the death of one or both animals.

Do Dogs keep snakes away?

Dogs do keep snakes away, and some breeds of dogs can instinctively detect and deter snakes, and even hunt and kill them. You can learn about the dog breeds that kill snakes here.

Why Snakes Have an Undeserved Bad Reputation

Snakes are one of the most persecuted animals on Earth, yet they’re also among the most secretive. And because it’s very hard to track and study snakes, we know little about them, and this knowledge gap s then filled with myths that tell more about our fear of what we don’t know than about the animals themselves.

Snakes are extremely beneficial to humans and pets because only a tiny percentage of snake species are poisonous, and the majority of snakes are non-hazardous.

Snakes nevertheless alarm many individuals, whose exaggerated responses frequently result in snakes being unnecessarily killed or removed from their habitats.

In some locations, rattlesnakes are taken from their dens with poles tipped with hooks or with nooses of wire, then impaled on sticks and decapitated.

Snakes help humans by controlling rodents that carry disease, spread damage to crops, and destroy structures. Snakes also serve as an important part of the food web in certain ecosystems; they are often preyed upon by hawks, owls, raccoons, and opossums.

Snakes Are a Necessary Part of the Ecosystem

The Exotic Pet Trade is a Threat to Snakes

Snakes like pythons, anacondas, and boa constrictors can be kept as pets in several jurisdictions, with potentially fatal results for their owners. Most captive snakes are kept in tanks so small that they can’t fully stretch out, and most owners lack the skills to properly care for them.

How to protect your house and dog from snakes?

You may take measures to avoid snakes on your own property rather than risking your dog being injured by one or becoming ill after eating one. In my view, this is less hazardous than instructing your dog to kill snakes.

Maintain your lawn throughout the summer as it grows. This will deter snakes rather than attempting dog feces. What is the reason? Long grass gives snakes the concealment they enjoy.

When grass is limited, snakes cannot travel freely without attracting attention from predators. It will also help you identify them before putting your foot on one!

Snakes are attracted to water, so if you have any more accessible water sources on your property, get rid of them. This implies cleaning up any damp places, such as tarps where water might accumulate or a children’s paddling pool.

Maintain the Yard as Clean As possible

Snakes like to hang out in filthy areas, and unclean conditions attract them. If you have garbage strewn about your yard, a snake could enter it. Snakes like to hide in piles of wood.

Snakes and rodents are attracted to messes, particularly food or animal feces. This indicates that, if you’re feeding your dog outside, the food bowls should be cleaned and replaced on a regular basis. The same may also be said for bird feeders.

Rats and mice may enter your yard as a result of the rubbish, enticing snakes to hunt and consume them.

Perches may be used to attract hawks and owls into an area, which helps keep snake numbers in check. Poles should be visible from the yard and the neighboring territory so that the hawk or owl has a clear view of both.

To keep snakes out of your home, sidewalks, and foundations, fill gaps and fissures.

If you don’t want to do this work yourself, why not hire someone to conduct an energy audit on your home? The findings of an energy audit may indicate air gaps and fissures that allow cold air to escape the property – these same flaws and crevices can be used by snakes and other small animals.

A snake is unlikely to bother a dog, and snakes will prefer to keep themselves hidden from the dog.

However, because dogs are curious and attempt to interact with them, they’re vulnerable to snake poison. Dogs who live in rural areas frequently come across snakes when out for a stroll. The dog may be poisoned if it is too eager or stubborn to leave a snake alone.

Why you should not fear snakes

Secrets of Snakes: The Science beyond the Myths