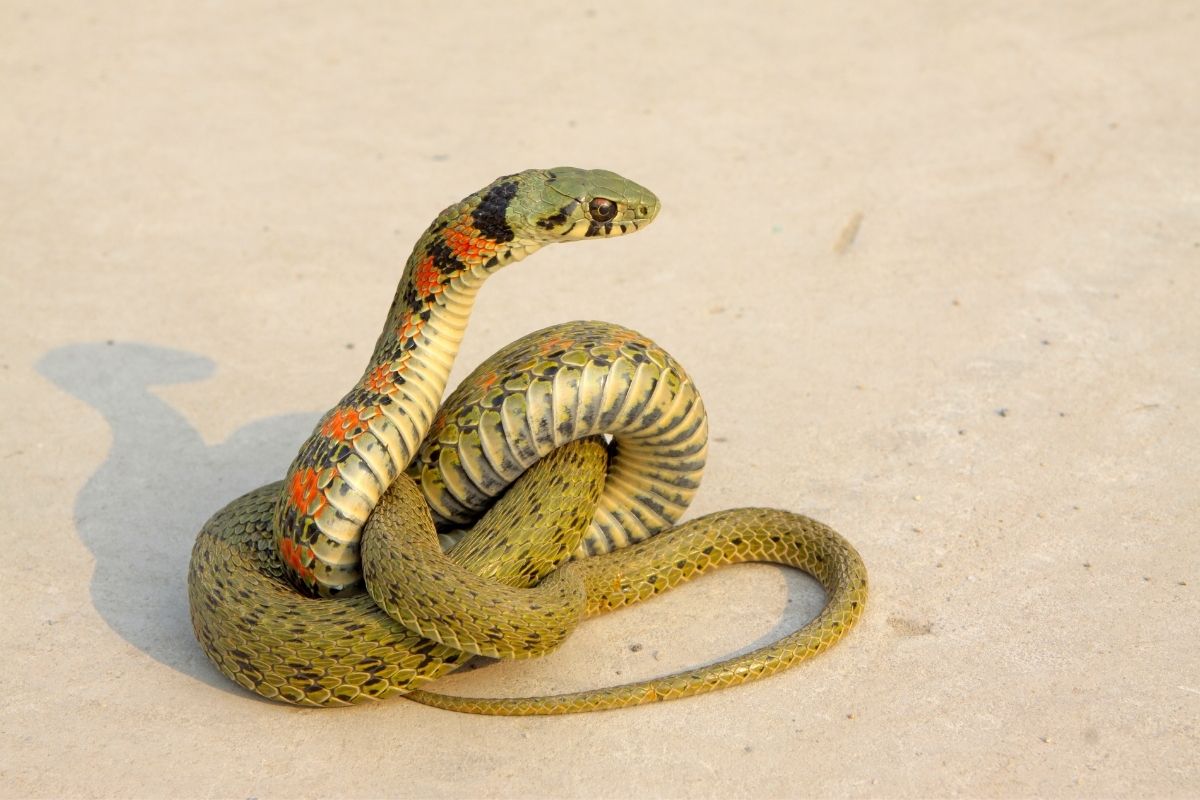 That’s because humans have an instinctive fear of snakes, and while this fear has been beneficial for us and probably saved a lot of human lives, it may have also caused us to be more aggressive towards snakes than we need to.

Speaking of fear; a lot of people believe that snakes can actually smell our fear, but is this true?

Can Snakes smell fear? Snakes can not smell fear in humans, and although they snakes have a very strong sense of smell that can detect the difference between our different emotional states, it’s unlikely that snakes will attack a person because of their smell, rather, snakes only attack when they feel threatened.

So, no, you should not think that snakes can smell your fear, although this doesn’t mean you are free to fear them. Acting afraid with any predator is almost always a terrible idea.

In this article, I’m going to discuss what snakes can actually smell and detect, how snakes react to your fear, and what to do if you encounter a snake in the wild (hint; it’s not to be afraid of them!). So keep reading…

Snakes have a keen sense of smell, which helps them locate food and water. They are able to scent in the same way humans do through nostrils. More significantly, they possess a tongue that is constructed to collect odorous molecules in an efficient manner.

Snakes use their sense of smell to a much greater extent than any other sensory modality. As a result, it should not be surprising that snakes can detect odors that humans cannot.

Because other animals, such as dogs, are able to detect fear through smelling the chemical changes that happen in our bodies, it’s reasonable to believe that snakes can also smell the changes caused by fear. If snakes can detect that we are fearful, this may encourage it to be bolder.

How Can Snakes Tell That You are Afraid?

While it’s unlikely that snakes can smell our fear, it’s very likely they can tell we are afraid through other means.

When people are anxious, they are likely to move more erratically and frequently with abrupt motions. Your pet snake will undoubtedly notice this sort of behavior. This can make your snake also anxious and fearful.

The next time you’re nervous around your pet snake, take a look at how you are moving. You probably will be much more erratic and jerky than usual. Your snake may notice this as well and become agitated or uncomfortable in response to it.

Otherwise, your snake may mistake your fearfulness as threatening. They may believe you are acting more like a predator than a prey, in which case this will encourage them to hide or strike more quickly.

Snakes are afraid of strange people, animals, and snakes

Snakes are solitary creatures, and they don’t like anything or anyone else but themselves. Some snake species have been observed to tolerate or even cooperate with other snakes, but that’s not true for all snakes.

Snakes are particularly wary of people, which makes sense as we are the apex predator of this planet, but they will also still be wary of new people even after they have grown accustomed to you.

How do Snakes Respond to fearful people?

Some snakes may see you as prey if you act in an abrupt, jerky manner. Snakes are drawn to prey-like motions like those exhibited by jerky.

If your anxiety makes you move fearfully, you will look like a prey. This is as true with snakes as it is with all other predators. If the snake thinks you are prey and that it can swallow you whole, it will strike, and being unable to swallow you after killing you will not stop it from trying first. You can learn more about this in this post that discusses if ball pythons can kill people.

If you’re attempting to pick up your snake and jerk your hand a lot, it may look like you’re capturing it.

If you hide your terror and move slowly and steadily, your snake is unlikely to consider you as a meal source. This type of response is improbable to manifest simply because you have fear in your scent.

Do Snakes attack you because you’re afraid?

Snakes may attack you if you move in a fearful way which a snake may interpret as threatening behavior, and it’s more likely the snake will attack you in self-defense than it is to attack you like a predator.

A snake will not see you as prey unless it’s large enough to swallow you, but any snake may attack you if it considers you a threat, including pet snakes.

Remember; all snakes bite, no matter how well you think you know your snake or how docile you think it is, if it considers you a threat, it will strike to defend itself without hesitation.

What to do if you encounter a wild snake?

They’re usually not interested in people unless they think of them as food sources (this is especially true for venomous snakes).

Remember; the snake is in your house either to eat rodents or hibernate through the cold winter, it’s not there to attack you or your family.

Why you should not be afraid of snakes

Although most people are terrified of snakes, you don’t actually need to be as worried of your pet snake striking you. You just need to be steady and calm, and the same goes for anyone trying to interact with your pet snake.

The general rule with all animals is: Don’t act like a prey and they won’t see you as one. Most animals are actually pretty terrified of us. We are big and weird and use shiny, harmful stuff.

Are Snakes afraid of people?

Snakes are usually cautious of strangers but not necessarily afraid of people, but they are wary of strangers. Depending on the species of snake, its natural habitat, and its history, some snakes see humans as predators, while others can see us as prey.

In general, snakes are solitary creatures that are wary of everyone and everything, and even as the snake owner, it may take your pet snake a while to get to warm up to you.

How to know your snake is afraid (of you or someone else)?

A snake that is scared may try to hide, flee if possible or hiss or strike in a manner similar to what an aggressive snake would do.

As a result, it’s best not to conduct handling sessions with a new reptile for the first few days.

You could frighten it into attacking you if try to do too much too quickly.

How to overcome your fear of snakes?

There is no one solution to overcoming your fear of snakes. It depends on how afraid of them you actually are (whether it’s the normal fear of an actual phobia (it’s called ophidiophobia) and what is causing it.

Some of the common treatments for overcoming your fear of snakes include:

Sometimes also referred to as systematic desensitization, this form of therapy helps you overcome your phobias and fears by exposing you to them in a safe environment.

It can be a virtual or a real encounter, too. If you are too fearful of snakes, your therapist may start by showing you pictures of snakes first before moving to a real snake (in a cage, of course).

This form of therapy can help you set short-term goals to overcome your difficulties and change your thought patterns – all with the help of a professional therapist, of course.

CBT is still considered talk therapy but it is more hands-on with its approach to problem-solving, and its first aim is to change your feelings about your fears.

Sometimes, the therapist may combine traditional therapy with medication to treat the phobia. The to most common types of medications therapists prescribe are sedatives and beta blockers and they have proven effective in treating phobias by making you more relaxed and less likely to become anxious or panic.

It’s important to note here that these medications are also addictive, so most therapists will try other methods before they resort to them to avoid dealing with the addiction problem later on.

Snakes can not smell fear, but they can still tell if a person is afraid through the behaviors of the other person. Keep in mind that snakes are predators, and as such, they react in a manner similar to other predators, which means they will attack if threatened without hesitation and they will attack if you think you are prey.

Keep in mind that snakes can also be afraid of you, so pay very close attention to how your snake behaves when you handle her and know when you should just let your snake be in its enclosure.

If you do encounter a wild snake in your home or in the outdoors, you should keep your distance, give it space, and call a professional if you need to get rid of it. Please do not try to get rid of the snake yourself or try to kill it as the snake will strike. Keep in mind that snakes are also capable of striking even after they are badly injured or even completely dead for hours!

At the end of the day, keep in mind that snakes are not as evil or as bad as most people believe, and we are not their prey and that by understanding how snakes actually behave, you can keep yourself, your family, and the snakes safe.

Before you go, you can also check out this article on whether snakes can actually smell blood here.

Snakes have friends too

What You Need to Know About Ophidiophobia: A Fear of Snakes