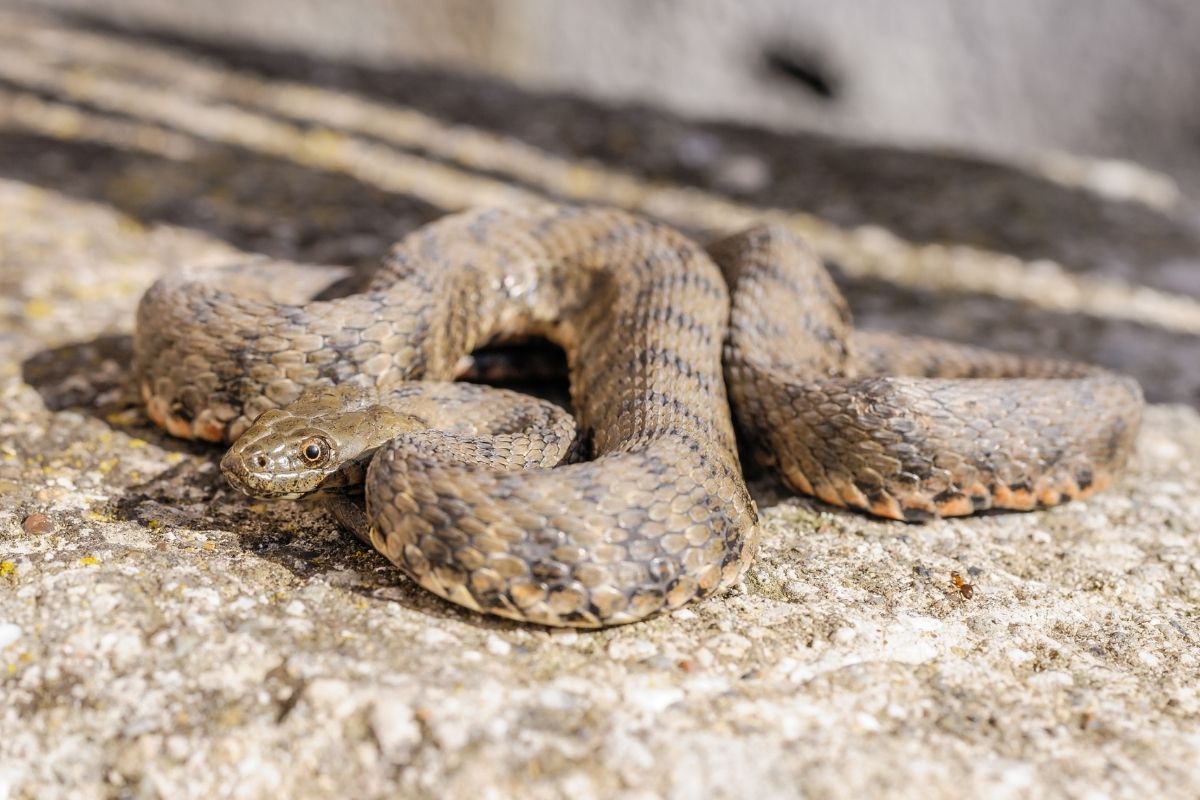 Snakes are among the most feared animals in the world. They’re creepy, they slither around, and many people have never seen one up close!

There are also a lot of common myths and misconceptions about snakes, and this all makes people think that snakes are somehow evil. And even though snakes play a crucial part in our ecosystems, they remain one of the most misunderstood animals on the planet.

For example, some people believe that snakes do not even feel pain, so is this true?

Do snakes feel pain? Snakes can feel pain, and since they can remain alive for hours after being decapitated or injured, they remain in pain until they eventually die. However, snakes are unlikely feeling the same kind of pain we do, but we don’t know exactly what kind of pain they do feel.

How do snakes feel pain?

Snakes are thought to be insensitive to pain, but they do feel it, just like we do.

What is truly difficult is understanding how the pain snakes can feel is different from the one we do, since we can not measure it through their facial or verbal expressions.

It is becoming more widely accepted that snakes feel pain, although it’s clear that the two experiences are not comparable.

If you walk on the pavement on a hot day with bare feet, you will feel excruciating pain, but snakes have no problem slithering on the desert burning sand all day long.

Their scales provide them with immunity to heat, so they can’t feel the pain of the heat like we do, but at some point, with the sands getting hotter and hotter, they will start to feel uncomfortable and pain as well.

We know this for a fact because we know that snakes will find a cool spot to sleep and will not just sleep under the scorching hot sun, this is why, for example, some snakes will hide in houses to hibernate during the winter for warmth and protection from predators until it’s warm and safe enough for them to go outside again.

How do we know snakes feel pain?

According to PetMD’s Guide to Veterinary Anesthesia, reptiles certainly feel pain because their bodies are equipped with the necessary neuroanatomy for experiencing pain. Reptiles also avoid painful events, and pain-reducing medications do have an effect of decreasing this response – these are indicators that they do feel discomfort.

Snakes are ectotherms, which is to say that they are cold-blooded. This phrase, on the other hand, doesn’t tell the whole story. Because they can’t generate heat on their own like we do, snakes must rely on outside sources of warmth. As a result, they frequently sunbathe for this reason.

Snakes can endure a wide range of temperatures without suffering any harm. When they cool down, though, their metabolism will slow as well.

Because they obtain heat from the sun’s radiation rather than through metabolism, their metabolic rate is typically low. Their low metabolism also helps them survive for longer between meals.

Unfortunately, the same reason that allows snakes to be able to go so long without any food is also the reason they can suffer very slow deaths.

How do snakes show pain?

If a snake is hurt, the intensity of the pain will affect how quickly it responds. When harmed, it does not scream like a human but swiftly retaliates or runs away in order to avoid additional agony.

Snakes are known to stay conscious and feel their body sensations for a period of time after decapitation, which is thought to be due to their sluggish metabolism, according on PETA.

After a snake’s head has been decapitated, its body may writhe rapidly and frantically, as though in agony.

You can learn more about this in my article that discusses the myth of the snakes that live after being cut in half here.

Is cold weather painful to snakes?

Snakes are undoubtedly sensitive to cold weather, which implies their bodies are sending them signals via their neuroreceptors. We know, for instance, that snakes seek out warm locations during the winter to hibernate in order to avoid the cold.

It’s not clear whether they’re suffering mentally or just reacting physically to the cold. However, there’s a good chance that their minds are in agony.

Reptiles, according to the most recent studies, can exhibit basic rage and sadness.

There’s also talk that they may enjoy being stroked or fed, but further study is needed.

The notion of love and pleasure is challenged among experts in reptiles. Because they don’t profit from it, they are “unable” to experience such emotions and, much less, communicate them.

Snake bonding isn’t the same as pet or feline bonding. For most snake owners, it’s not love or affection, it’s acceptance, which is the most one can expect from reptiles.

Still, there are instances of snakes revealing deeper emotions.

We know for fact that snakes can feel pain, we just don’t know how intense it is or whether it’s similar to the kind of pain humans feel.

We can observe snakes feeling pain when they are stepped on or injured, and the tragic fact that they can feel pain for hours after being seriously injured or decapitated is just heart-wrenching to imagine.

Snakes can suffer and feel pain like other animals when they are injured or in severe cold, but it’s unknown how they feel this pain and if it’s anything like the kind of pain we can feel.

Do snakes have feelings?

Snakes do have feelings, but they are limited to the basics of survival and reproduction such as the fear of predators, the enjoyment of food, and the aggression to protect themselves and their offsprings (for some rare snakes as discussed here).

Snakes can feel pain but further studies are still needed to confirm whether this pain is like anything humans can feel. We know that other animals can feel pain much like humans do, but it’s a bit more complicated with reptiles and more study is needed in this area.