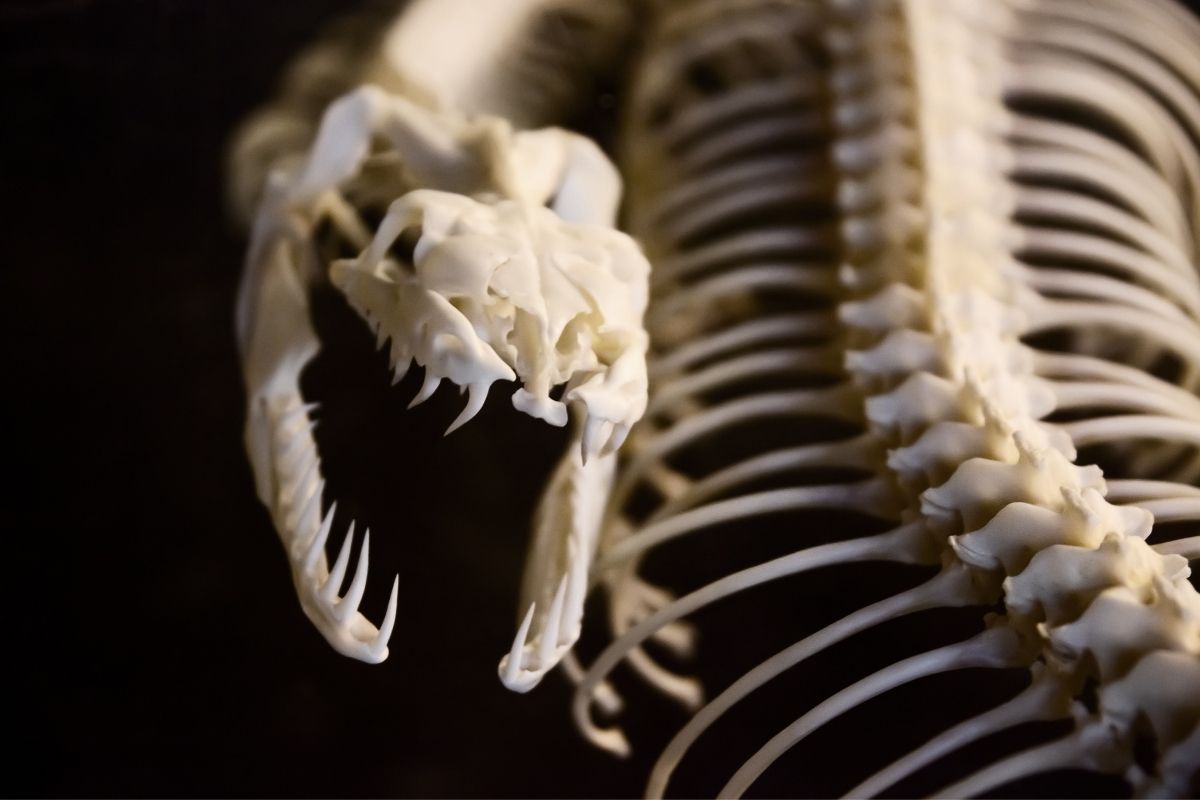 You see them slithering around, moving smoothly and easily on surfaces, and you think to yourself, they must not have one bone in their bodies, right?

It makes sense when you think about it, but just because it doesn’t make sense from a human perspective doesn’t actually mean it’s the truth.

So, what is the truth? do snakes have bones? Snakes do have bones, and although they have a few kinds of bones compared to mammals, snakes actually have more bones than most mammals, with some long-bodied snakes like the mamba having as many as 400 bones in their bodies, and shorter snakes having only 180 bones. Most snake bones are in their backbone.

Surprised? well, you should be. The fact that snakes do not only have bones but actually have more bones than humans is quite amazing, but it actually only gets more impressive from here.

Keep reading as I explore even more amazing facts about snake bones.

Do Snakes have bones?

Snakes do have bones, and they have a lot of them, definitely a lot more than you think they do. Snakes belong to the vertebrate family, which means that they do have a backbone.

However, the thing with snake bones is that while they do have a lot of them, their bones are of fewer kinds than humans and mammals in general.

Do Snakes have bones or a skeleton?

Snakes actually have both; bones and a skeleton. The skeleton is basically the structure that gives animal species, including us, our form, and they could be either internal such as in humans and most mammals, or external such as in scorpions.

For snakes, their skeleton consists of all their bones, and the bones basically give the muscles a place to attach to and protects their internal organs.

The bones, when put together with the cartilage that binds them together, form a skeleton that provides shape and structure to the snake’s body.

So, if you are asking if snakes have spines, vertebrae, or a backbone, the answer is that it has all of these.

The backbone of snakes is their spine, and it’s made up of all those smaller bones that are called the vertebrae.

How many bones do snakes have?

Snakes have more bones than most other animals, with a range of 300-400.

The Skeletons of snakes are made up of a skull, backbone, and numerous rib bones. Despite the fact that they have a robust cage of rib bones, the snake’s body is full of extremely flexible ligaments.

The myth that snakes have no bones grew from the fact that this transformation makes them appear boneless. The hollow fangs of poisonous snakes are largely made of bone-like substances, as well.

The fangs are actually syringe-like modified teeth, unlike the appearance of bone. The venom travels through them in some species, and over them in others.

Why do snakes have so many bones?

Snakes can move in every direction (yes, snakes can even move backward) because it has so many bones.

A vertebrate with fewer bones, such as a person, could not bend and twist the way that a snake can.

The numerous bones that a snake has strengthened its spinal column while also providing additional protection to its spinal cord.

Do all snakes have bones?

Snakes are vertebrates, which means they all have an interior skeleton with a backbone. This means that yes, all snakes do indeed have bones.

Because snakes can’t slither, walk about, and attack prey without their bones, they would be unable to eat, move, or function at all if they didn’t, so all snakes must have them.

How do snakes bones work?

The snake’s bones are unified by a network of flexible joints and ligaments. This allows the snake to move all of its body by moving part of it.

Because it works in the same way as a long, stretchy spring, broken bones may be fatal to snakes. If there is one break in the wrong location, it might jeopardize the snake’s ability to move completely.

How strong are snake bones?

Snake bones are extremely robust, despite being light and flexible, owing to the calcium carbonate that makes up almost half of their structure. Some snakes kill their prey by compressing it.

Humans, on the other hand, are unable to do this with their food because of our larger bones. Snakes must have durable bones that are joined with equally powerful muscles in order to kill and compress animals many times greater than themselves

Why do snakes have hip bones?

Leg bones are known as the pelvic spurs, or hip bones, in scientific circles. Snake hip bones are connected to the backbone, just like human and many other animals’ hips.

The cartilage survived, but the bones were connected to the vertebrae because the pelvic spurs originally linked to active limbs.

In certain species, the hip bones are highly reliable indicators of sex. Males have longer, more pointed “claspers” that they employ in courtship, whereas females have shorter and rounder ones. Snakes have a lot of bones relative to other creatures because to their flexibility, but there’s a lot more to snakes than just their skeletons.

Why do snakes have leg bones?

Snakes are unusual in that they have no appendages in their skeletons, which means they lack leg or arm bones.

However, vestigial leg bones are present in some snake skeletons. A vestigial structure is a feature (such as a bone, tissue, or organ) that does not work in the same way as its ancestral form. Snakes do not have complete legs yet; however, they do have little bones that indicate their evolutionary ancestors had legs.

Snakes evolved to slither on their own bodies because it was beneficial to their species. Their legs are merely vestigial remnants of what snakes were like in the past, not what they will become.

Do Snakes have jawbones?

Snakes have jawbones that are highly unusual in the animal world. The majority of all animal skulls are made up of the cranium (which contains the brain), maxilla (the upper jaw), and mandible (lower jaw). For most species, the maxilla is firmly connected to the cranium.

Snakes, on the other hand, have an extremely more complex anatomy.

Snakes’ jaws are divided into two parts (a left side and a right side), which are held together by flexible ligaments, allowing them to open wide enough to consume prey much larger than themselves.

How to know your snake has broken bones?

Snakes lack the same symptoms that humans do when their bones break. There are, nevertheless, a few indications to look for.

If your snake’s body has any bulges, jagged edges, or an unusual form or curve, it’s a bad sign. As the bones in one of your snake’s limbs are fractured, the region may grow and appear jagged.

Many snake owners report that their snakes become more aggressive when someone approaches a certain part of its body, indicating that it is in discomfort and does not want to be touched.

Your snake may be suffering from mobility issues as well. If your snake has a bone fracture or break, his movement will likely be abnormal or restricted.

A broken bone is a serious issue and can be even fatal to snakes, so if you notice any of these symptoms, you should make an appointment with the vet as soon as possible.

How do snakes move

A Study shows how snakes slither