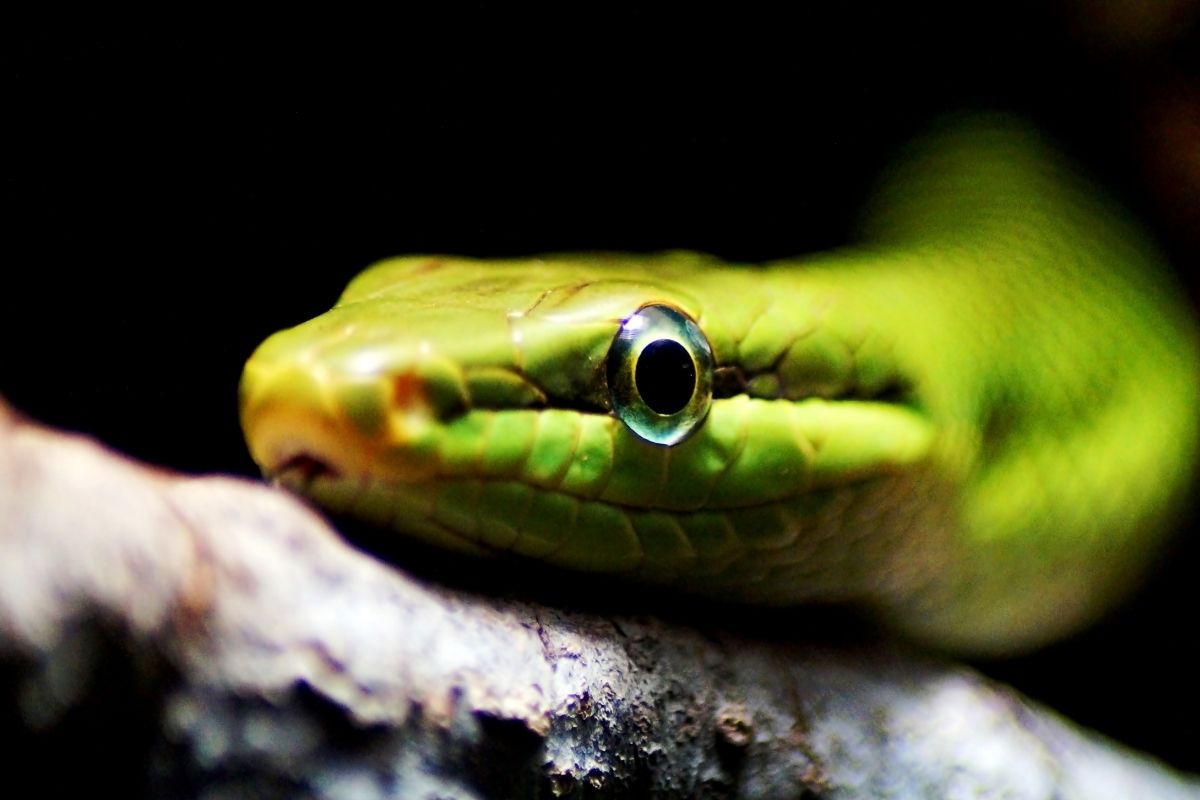 These are all very valid questions to ask, and you are not alone in asking these questions, I have asked them myself, so I did some research to find them, and here is what I’ve found.

So, do snakes have eyelids? Snakes do not have eyelids, instead, they have what is called brilles or spectacles, which are layers of transparent membranes that don’t move but can cover the eyes and protect them from damage, but since it doesn’t move, snakes can’t blink or close their eyes when they sleep.

So, yes, snakes truly do sleep with their eyes open, but they do close their retinas while they are asleep to prevent the light from getting into their eyes and they can enjoy a restful sleep.

Of course, you now have a lot more questions, and this is completely normal. Having no eyelids is way more interesting than one would ever think it can be, so stick with me as I explain how do snakes protect their eyes, sleep, and cry without their eyelids…

Do Snakes Have Eyelids?

As explained earlier, snakes don’t have eyelids. No snake has eyelids, and this is actually true for most reptiles. Although some groups of reptiles have a translucent eyelid that does move horizontally across the eye to protect it, it’s not really an eyelid in the way we think of it on humans or mammals in general.

Why Don’t Snakes have eyelids?

Snake don’t have eyelids, but they have eye scales, scientifically called the brilles or spectacles.

These spectacles are the reptiles’ version of eyelids. Since snakes do not have legs to stand on, their eyes are almost always in touch with the ground, and they need protection from things like dust and grist, and the Brilles provide this protection and keep the fluid in the eyes from getting dried out.

However, these brilles are unlike eyelids in a few ways. First off, they are transparent, so they can never give the snake some dark, shut-eye time as our eyelids do. Secondly, these brilles are made of scales, which means that snakes shed them when they shed their entire skin.

How do Snakes Sleep with Their Eyes Open?

As mentioned earlier, snakes do sleep with their eyes open, but they do close their retinas while they are asleep in order to prevent the light from getting into their eyes and disrupting their sleep. The brilles work as a sort of natural blindfold for the snake, and they do not disturb their sleep.

The brain of snakes controls their sleeping, so the snake can still sleep just fine with its eyes fully open. This may be difficult for us to imagine, especially for someone like me who would not go to sleep if there is any light in the room, but it’s true.

Does having Brilles or scaled affect the snake’s vision?

You would think that these Brilles, since they are always covering the eyes, would be determinantal to the vision of these snakes, but this is not true because they are as transparent as your glasses at their cleanest.

Can you find this hard to imagine? just think of the billions of humans that live their daily lives with glass or lenses.

Snakes are colorblind, but they have two types of light receptors. Rods, the first type, allows them to see in dim light but is blurry. Cones, the other type, on the other hand, allow snakes to see clearly. This enables snakes to hunt effectively in their underground hideouts and also sees its food clearly with enough accuracy to properly strike it.

How do Snakes Cry without Eyelids?

All reptiles, including snakes, produce tears, but they don’t cry in the way humans consider crying. The snake’s tear glands are behind its lenses, and they are responsible for creating the fluid between the eyes and the spectacles.

However, snakes can not really cry because their tears never flow down their faces, neither can they overflow their eyes like it happens to us.

Since snakes do not have eyelids, they cannot blink in the way that humans do. However, they do have a sort of wink where they can close their brilles for a moment to clear their eyesight. This happens when the snake is threatened or trying to intimidate another animal.

Shedding their Brilles or Spectacles

Because the scales of their eyes are part of their skin, when a snake sheds its skin, it also sheds the spectacles or brilles. Before they start the shedding process, you will the eyes getting milky-looking and opaque.

This change happens as the snake will secrete a milk-like fluid between the old and new spectacle layers to facilitate its separation.

What if the old brilles or spectacles are not removed?

Some snakes will face trouble while shedding their skin, and since the brilles are part of their skin, they, too, can get stuck during the shedding.

Troubles happen when the brille separates from the shredded skin and get stuck on the top of their eyes instead of getting removed with the old skin.

The brille will then become what is referred to as “retained spectacle”, which is a serious health problem that needs to be addressed, thankfully, if you know what you’re doing, it’s pretty easy to handle this issue.

How to know your snake has “retained spectacles”?

If your snake is shedding and you notice that their eyes seem cloudy, there is a chance the old brille is still on the top of their eyes. Another way to identify the problem is by looking for the old shed skin, which should be in one piece as in the picture below:

You may think it’s a good idea to leave it to the skin to handle it, but this will only cause the problem to get worse because a stuck brille is a great breeding ground for bacterial infections. If your snake could remove the stuck spectacle, it would have done so already with the rest of its skin. Your snake now needs your help.

How to remove the retained spectacles?

The easiest way to go about removing the retained spectacles would be with a warm bath. Give your snake multiple warm baths on a few days and see if this removes the spectacles, and it usually does.

If after a few days of warm baths you can still see your snake’s eyes being cloudy or foggy, you shouldn’t try to remove the attained skin on your own unless you are absolutely sure you can do it. Remember; all snakes bite, and even the gentle of snakes will bite their owner if you cause them pain.

The most common cause of retained spectacles on snakes is a lack of humidity in the habitat. The skin gets dry as a result of low humidity. As a consequence, it does not come off in one piece as it should and leaves behind patches instead.

There are a few more possible reasons for your snake to have glasses. Malnutrition or mites/bacterial infections are two examples.

Make sure your snake has enough to eat, and that it is free of illness or other type of sickness. Consult your veterinarian if you feel your snake is ill but cannot cure it yourself.

Do Snakes have eyelashes?

No, snakes do not have eyelashes. Eye lashes are a feature that is only found on mammals and no reptile has eyelashes, although it would have been kind of awesomely weird for snakes to have them.

Speaking of things that would look weirdly awesome or awesomely weird, have you heard the common myth that older snakes grow beards? It’s exactly as crazy as it sounds, and you can learn more about it in my article on can snakes have hair or beards here.

Do snakes have eyelids? They do not, and this is a good thing for them. As reptiles, they do not produce any tears to bathe their eyes with and so rely on licking themselves clean or rubbing against something moist (e.g., grass) in order to keep their eyes from drying out too much.

If you do find that your snake’s vision is cloudy, it most likely means there is an old spectacle stuck on top of the eye, which should be removed as soon as possible before it causes infection.

Do Snakes close their eyes?

Snakes can’t close their eyes since they don’t have eyelids, but they do close their retinas while they go to sleep to enjoy a peaceful sleep.

The role of the spectacle in the visual optics of the snake eye – J.G.Sivak

Does every animal have eyelids?