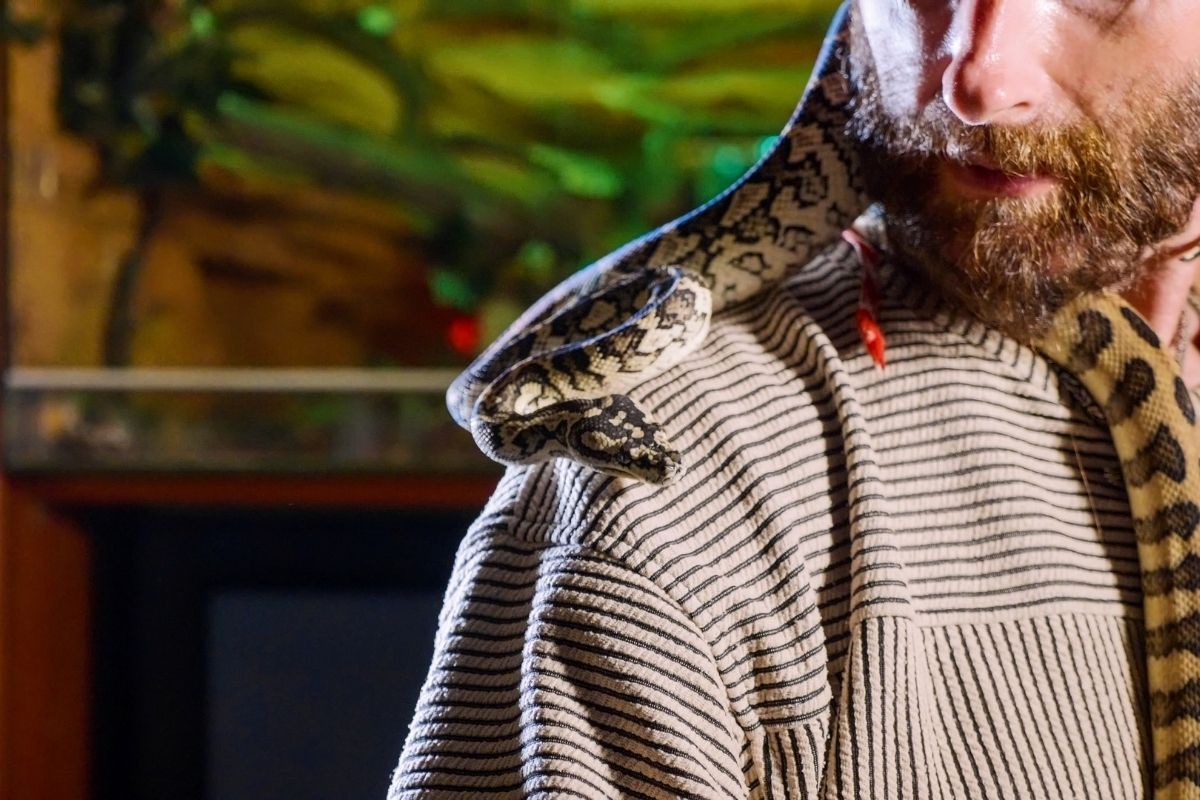 They just seem so slick moving around and slithering, and if you have ever touched any of them, you may have not noticed any hair.

Most people know very little about snakes, and it’s only normal for them to have such questions, thankfully, this one is pretty simple to answer.

So, do snakes have hair? Snakes do not have any hair on them, and they are incapable of growing hair because as reptiles, snakes don’t have the proteins to grow hair. Hair would also be disadvantageous to snakes as it will be an insulating layer that prevents their body from getting the most heat from their environments.

So, no, snakes do not have any hair, although there is a very common myth about this that we will discuss later. To understand why snakes don’t have any hair and why that’s a good thing, keep reading.

Do any snakes have hair?

No, no snakes have any hair. Snakes are reptiles and they are covered with overlapping scales. They use this for creating friction and for moving, but snakes are not capable of growing hair, just like all reptiles.

Snakes do have the proteins for growing hair-like structure, but it doesn’t really resemble anything that we, humans, recognize as hair.

No, older snakes do not grow hair or beards, as some people believe, but this is just one of the many myths people believe about snakes.

Why would some people believe that older snakes grow beards is really and truly beyond me and my limited understanding of how the fascinating human brain works.

But I have seen hair on snakes in the wild!

No, you have not. You have seen something resembling hair, but not actual hair. Periodically, snakes cast of moult and if some moult remains on the snake, it will appear as if the snake has hair, but it doesn’t.

Sometimes, some snake charmers will stick hair onto the snake’s head to make them look rather special, and some tourists will see it and think it’s normal, but it isn’t.

Do any reptiles have hair?

No, no reptiles have hair. Reptiles, in total, can’t grow any hair. Like snakes, they have proteins that can help them grow hair-like structures, but not hair.

Why not having hair is a good thing for snakes

You may think your hair is good, and it is. Hair is actually quite awesome, and it’s a lot more complicated than you may think. In fact, hair is so complicated that science hasn’t figure out how to stop hairloss or control it yet, we can only slow it down.

Anyways, for snakes and reptiles in general, hair would be a disadvantage.

Remember that snakes are cold-blooded animals, while we are warm-blooded. In all cases, hair would be an insulating layer that prevents heat from transferring or reduces the heat that can be transferred from or to our bodies.

For us, this is great news. Our bodies generate heat, and to stay warm, we need to “cover up” more and keep this heat in. Snakes are not like that.

As ectotherms, reptiles are unable to generate their own body heat, and they rely solely on their environments to get the heat their bodies need to function.

And yes, snakes do need heat for their bodies to function normally. In fact, snakes rely on external heat sources so much that pet snakes can’t survive even a few hours without a heat source in their cage.

Snakes do not have any hair. Snakes are reptiles and they are covered with overlapping scales.

They use this for creating friction and for moving, but snakes are not capable of growing hair, just like all reptiles. No old snakes grow beards or hair either- it’s just a myth, although a pretty funny one.

Before you go, you may also want to check out this article on how many bones do snakes have.

Do Snakes have legs?

Snakes do not have legs, but some snake species, like pythons and boa constrictors, do have tiny hind leg bones that you can find buried in their muscles towards the ends of their tails.

What these tiny leg bones mean is that snakes have evolved from animals that did have legs but have found it to be advantageous to slither and with time they used their legs less and less until they disappeared.

Do snakes have fingernails?

Snakes do not have fingernails, but some snake species have bones that resemble these used in our toes, which means they probably had feet, toes, and even nails (probably) at some point in their evolutionary history. Snakes also have the kreatine protein, the protein responsible for creating hair and nails.