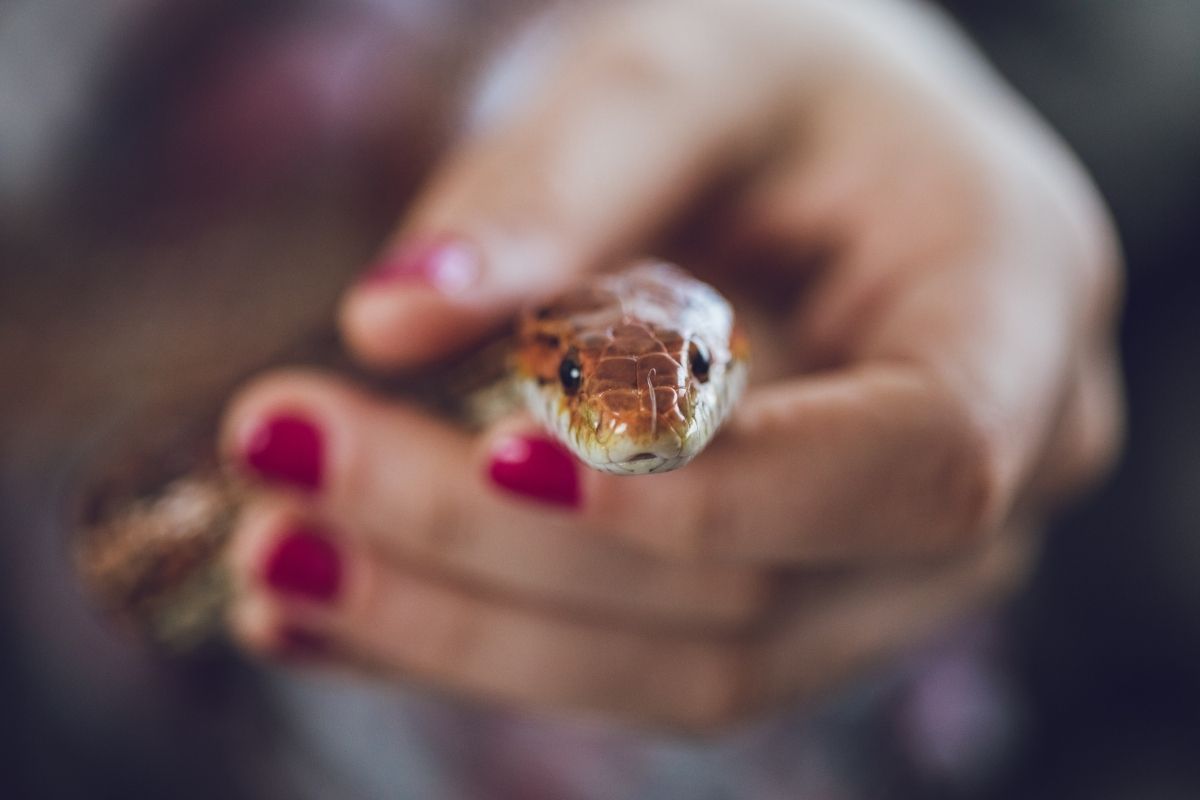 There are thousands of snake species, and all of them are predators. Snakes are not scavengers that will seek out injured or dead animals to eat them, they are predators that will attack live and healthy prey and take it down.

Scavengers are usually the ones attracted to the smell of blood because it usually indicates an easy meal.

So, do snakes like blood? Snakes do not like blood as far as scientists know. A study has found that brown tree snakes are more attracted to the smell of menstrual blood and scientists hypothesize that’s why these snakes attack babies in Guam, but this is not sufficient evidence to conclude that snakes are attracted to human blood.

Basically, we need more research on the topic, but as far as the evidence we now have and the limited knowledge of we have of how snakes work and hunt, most scientists and researchers agree that snakes are most likely not attracted to human blood.

To understand why we believe that and why menstrual blood in particular was found to be attractive to snakes, we need to discuss a few things, so keep reading as I answer all the questions running through your mind right now…

In a very interesting study that I just wish I could’ve been there to witness who came up with the idea, researchers studied how snakes respond to menstrual blood. For this study, they needed a snake that does attack humans, and the choice was easy: The brown tree snake was the best choice available.

The brown tree snake is a snake that’s native to the South Pacific, however, it was unintentionally introduced to Guam after the second world war, and it quickly became an invasive species since none of the local ecosystem’s predators recognized it as prey, so it was basically unchecked and left to roam free.

Thankfully, in Guam, they now use dogs to keep these snakes away and this strategy is proving effective so far.

Unfortunately, in Guam, these snakes do bite, kill, and eat babies, which is why scientists wanted to know why, in particular, are these snakes attracted to babies.

This theory makes sense because that’s how predatory instincts work in any predator; the smell of blood means an injured and weak animal that is going to be an easy prey. That’s why sharks, lions, tigers, and other predators hunt by the smell of blood.

To test this theory, the researchers had ten captive snakes and they gave them used and unused tampons that were moistened with water and simply tracked the frequency at which the snakes would flick their tongues at the tampons and to which tampons the snakes were attracted to.

The results were quite conclusive: The snakes flicked their tongues twice as much when they were presented by the used tampons, and a snake even attempted to strike it.

The problems with this study

There are a few problems with this study, though: first of all, the sample size was very small (only 10 snakes), and secondly, there is no evidence that the snakes were actually attracted to the smell of blood or if it’s menstrual blood specifically.

There is also another problem; snakes do not hunt only by scent, but also by sensing heat. Snakes have an excellent sense of smell, but they can also sense heat and use this for hunting live prey, so if presented with a cold tampon and a warm baby, we are not sure the snake would still go for the tampon even with the blood on it.

Another problem with this study is the species chosen; brown tree snakes are known for attacking small animals, including humans, but this is not the case for all snakes.

In fact, out of the 3,700 known species around the world, only 15% of them are considered dangerous to humans, and a much smaller percentage of those are large enough to consume humans (remember, snakes consume prey by swallowing them whole, so the snake needs to be pretty humongous to swallow an adult whole).

Even with this study, scientists believe that snakes are not attracted to blood in general. It doesn’t align with what we know about how snakes hunt and kill their prey, and we do not have enough evidence to support this hypothesis, and a study on 10 brown tree snakes does not change this at all.

We need a few more studies at least to begin to understand how snakes react to blood, but as the current body of research goes, there is not a lot to fear.

Another fact that supports this idea is that snakes are literally everywhere in the world except for Antarctica, and there are over 600 venomous species of snakes (out of the 3,700+ species of snakes), so if snakes were attracted to blood, snake attacks on people would have been a much larger problem than it is.

How do snakes sense humans?

The way snake senses is not only different from ours, but it’s also quite fascinating in its own way. You can learn more about how snakes sense things and people in this article on do snakes lick.

So do snakes like blood or not? As we said in the previous section, there is no evidence to support that hypothesis. Scientists do not think so and have other explanations for this study on do snakes find tampons with blood more attractive than those without.

This being said, you should probably avoid handling any snake (even a non-venomous one) but do not fear snakes because of this particular study, which you can find in the helpful resources section below.

You may also want to check out this article on whether snakes, themselves, have blood.