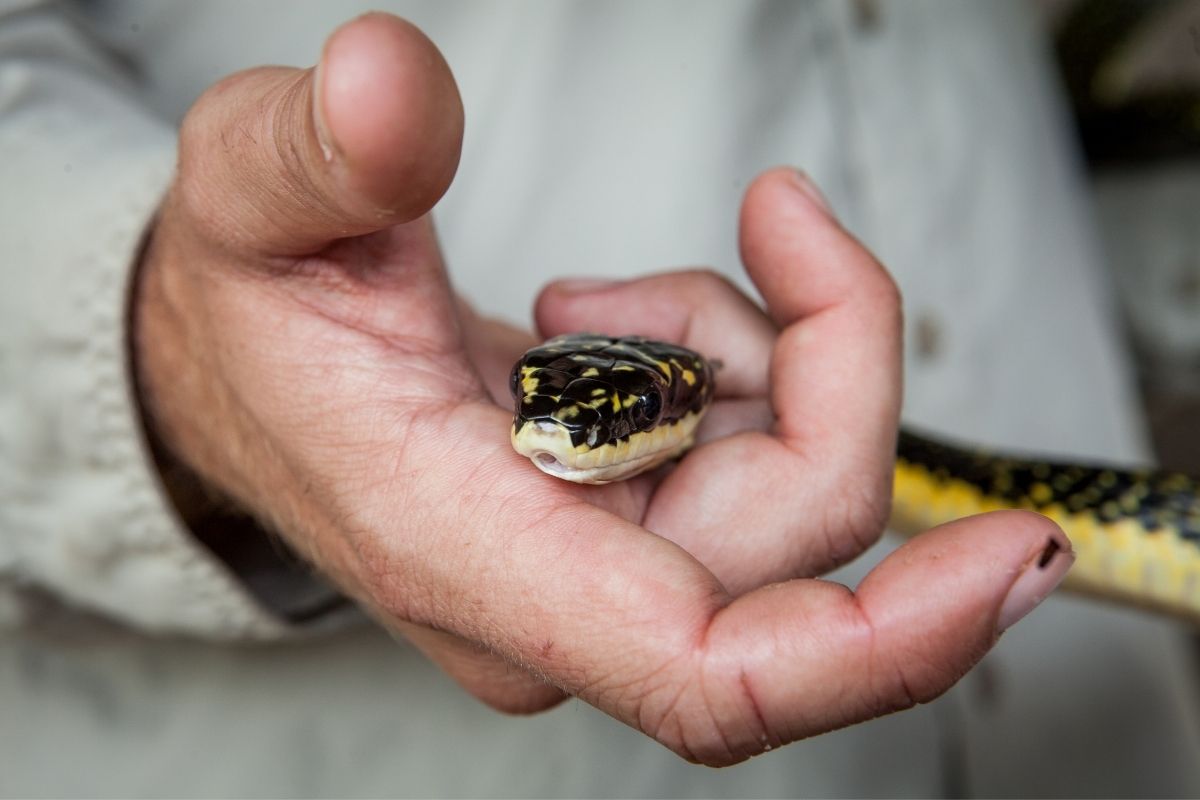 It’s safe to say that, as humans, we are pretty new to snake ownership. Owning a pet snake is very different from owning a pet dog or cat, or any other pet for this matter.

One of the most obvious signs of difference between them is in how much attention they need. Since snakes are solitary creatures by nature, many people snakes do not need any attention, but is this true? I’ve asked some reptile experts, and here is what I’ve found.

So, do snakes need attention? Snakes do not need attention and do not enjoy human attention or affection the way dogs or cats do, but snakes can be conditioned to tolerate being handled and will be fine with it as long as you do it sparingly, however, pet snakes still rely on their owners for food, safety, and overall well-being.

This is one of these rare cased where the common belief is actually true, but there is a big asterisk that should be added. To understand really how much attention your snake needs and how you should give it to them, keep reading.

Let’s get this out of the way first: Do snakes need attention? Do not feel bad if your pet snake does not seem to get lonely being alone for hours. Snakes are solitary animals and do not need human interaction in order to be happy, but they still rely on their owners (whether it is you or someone else) for food and safety.

Your snake is not like dogs and cats in the way that they need your attention to stay happy and content.

Snakes do not like attention, actually. They are solitary animals and predators, and they don’t enjoy the attention of humans or anything else for this matter.

However, with time and proper conditioning, snakes can be trained to accept humans handling them.

Snakes can certainly feel when you pet them, but the experience isn’t as pleasurable for many domesticated animals. If your snake doesn’t struggle to get away or bite you when you touch it, there’s a good chance it enjoys the physical contact.

Snakes will often rub against one another during mating rituals or to remove dead skin after a shed, therefore every rubbing or petting has a distinct goal.

Snakes will also love to squirm around in new bedding, so they can get a sense of touch and seek out surfaces and substrates that feel pleasant.

Some snake owners, particularly those who own ball pythons, claim their snakes rub their faces against their arms or hands after eating, but it is more likely they do this to clean their faces after consuming regurgitated food.

You can learn more about why your ball python is rubbing his face against you here.

If your snake appears to enjoy being pet, mild and occasional handling is acceptable. Some snakes respond well to a light stroking down their body, a head touch, belly massage, or even a chin scratch, while others do not.

Snakes may have distinct personalities, and one might like something else, but being kind and respecting your snake’s boundaries are crucial.

If your snake squirms away, hisses, tries to bite you, strikes or puffs up, stop stroking it. These are clear indications that your snake is dissatisfied with your affections and does not want to be touched.

Snakes do not like to be held the way other pets do because they do not have limbs, so holding them should always be done gently and with respect for their body language.

If you are able to hold your snake without it feeling threatened by your touch or if it tries to strike at you then that is great , but do not do anything that makes your snake uncomfortable or afraid.

Snakes can tell when you touch them, but the sensation isn’t as good as it is for many domesticated animals. It’s difficult to determine whether your snake likes physical affection if it doesn’t struggle or bite you when you pet it .

It’s vital to remember that regardless of where you’re stroking your snake, it should always be petted in the direction from their head to their tail.

You should never stroke your snake against the direction the scales naturally sit, as this can be harmful for them.

If you are not sure how your snake feel about you, make sure to check out this post on how does your pet snake really feel about their owners.

When to not pet a snake?

When attempting to pet a snake, there are several occasions when it is not safe to do so. When your snake is shedding, its skin might be more sensitive, and it may have difficulty seeing. It could also be stressed, and you could inadvertently damage the new skin layer on your snake by removing old skin too soon.

Another time when petting your snake is not a good idea is when it’s mealtime. Putting your hands into the enclosure of your snake, much less attempting to touch it, is not a smart idea if it’s in the mood for food. Your snake may bite you instead of its food if you grab hold of its hand or finger and mistake

Speaking of feeding time, you should take a moment to learn if feeding your snake live mice is a good idea here.

Finally, if your snake is sick, has parasites, or has been injured, do not handle or pet it. Allow it to rest and stay warm instead of subjecting it to additional stress or discomfort through petting.

What not to do when petting your snake

Do not do any of the following when you are petting your snake:

How to condition your snake to be handled?

Here is how to do it:

Snakes are low-maintenance pets that require little care. In reality, they find little to no attention useful.

How often should you handle your snake?

You should only handle your pet snake once or twice a week, but this frequency can change with time as your snake gets more and more comfortable to you.

How often you should handle them will also depend on the snake’s species, age, and temperament. Yes, snakes do have different personalities and even snakes from the same age bracket and species can act differently.

Secrets of Snakes: The Science Beyond the Myths by David A. Steen