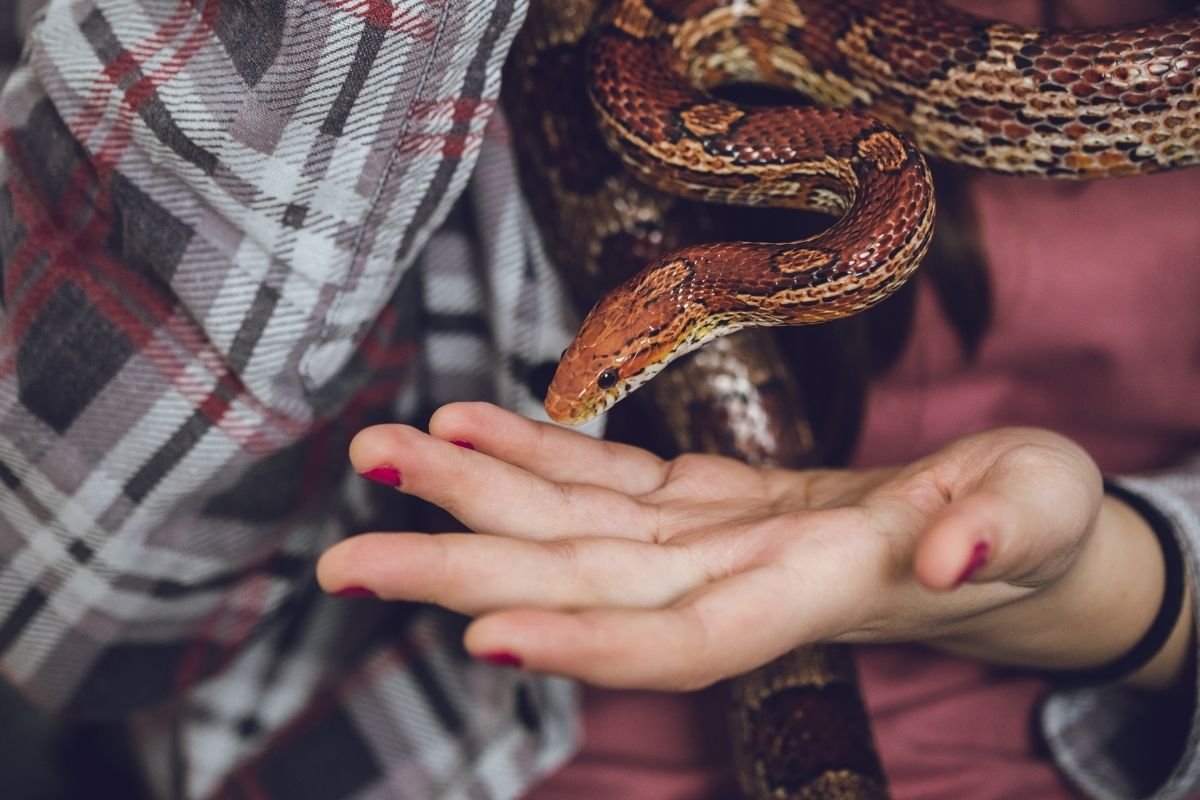 Snakes are some of the most misunderstood animals. They have a reputation for being dangerous and sneaky, and that there is just this to it.

However, in recent years, more and more people started to learn how snakes can actually be great pets. Snakes are low-maintenance than other pets and they have fewer requirements.

But what about affection? can snakes even show affection?

And the more important question; How do snakes show affection? Snakes can’t show affection in the way we expect from other animals since they can’t feel love, but a snake will show you acceptance by allowing you to handle them, curling around your body from behind (known as sneaking), and allowing you to pet them.

Snakes are not your average house pet. Dogs and cats can feel a wide range of emotions, including love. A person who constantly seeks attention is not the ideal match for a snake.

Snakes have a smaller frontal lobe in their brains than dogs and cats, suggesting that they are less bright.

To summarize, they can’t express or even feel love in the way we think of it. This isn’t always a popular notion among snake breeders, who believe their pet knows and cares for them even if they don’t have the ability to show it as other animals do.

What snakes actually communicate is a sense of acceptance on the part of the snake and serenity. Snakes, while they can’t express love or care in the same way as dogs or cats, may feel love and care for their owners in their own unique ways.

A Snake’s instinctive (and basic) affection

Snakes are motivated by the most fundamental requirements of drinking, eating, breeding, and simply surviving, and love or affection has no role in these matters.

The amorous habits of cobras are only relevant during mating, when males and females snake snakes merely get together to have kids and snake moms don’t spend any time with their young.

It appears, in many cases, that people connect a lack of fear or the absence of snake behavior when threatened with a snake with a sense of affection.

Many animal experts believe that snakes, like humans, may be able to form a bond with their owners. This is a highly contested subject among snake keepers, and for many people, the snake appears to care about them.

To learn more about how snakes behave around their owners and show them that they like them, check out this article on the perspective of science and owners on snakes’ affection.

How do Snakes show affection to their owners?

The next time you are around your snake, watch out for these three things:

Snakes usually don’t like being touched, handled, or pet, so if they allow you to handle them quite comfortably, it’s probably a good sign that they like you.

The most a snake can show a human that is as close to affection as possible is their acceptance of their presence. A snake may allow you to handle it comfortably as long as you stay as still and as quiet as possible, and it may even enjoy the warmth your body gives.

Do Snakes recognize their owners?

While we can’t say for sure that snakes recognize their owners, it’s definitely a possibility.

There are many cases of snake owners reporting that when they’re upset or feeling down, their snake will coil around them and stay with them until they feel better.

In other cases, snakes have been known to attack people who were not on good terms with their owners. This is how they defend themselves and show their displeasure, but it’s also possible that snakes don’t know how to express affection in ways we expect them too.

Snakes do not communicate vocally or through facial expressions like dogs and cats do, so understanding how a snake shows expression is difficult.

They do feel emotions, though how complex these are and how they express them is not fully understood. What we know for sure is that snakes only show affection in their own way – through acceptance of presence or by showing signs of comfort when you handle them carefully. Also, it’s possible that some snakes may recognize their owners based on the owner’s scent.

If you’re looking for more information on how snakes show affection, be sure to check out this article!

How do you tell if your snake likes you?

You can tell whether or not your snake likes you if it is generally calm and quiet when you’re around, readily eats and explores in your presence, comes to the front of the cage when you are there, and is calm and docile while being handled.

Snakes dislike being cuddled, but if they must, they will seek out physical contact for a variety of reasons. This usually involves being held gently in their owners’ hands or mounting up onto them. It isn’t driven by affection, though. It’s always linked to their survival instincts.

Secrets of Snakes: The Science Beyond the Myths by David A. Steen