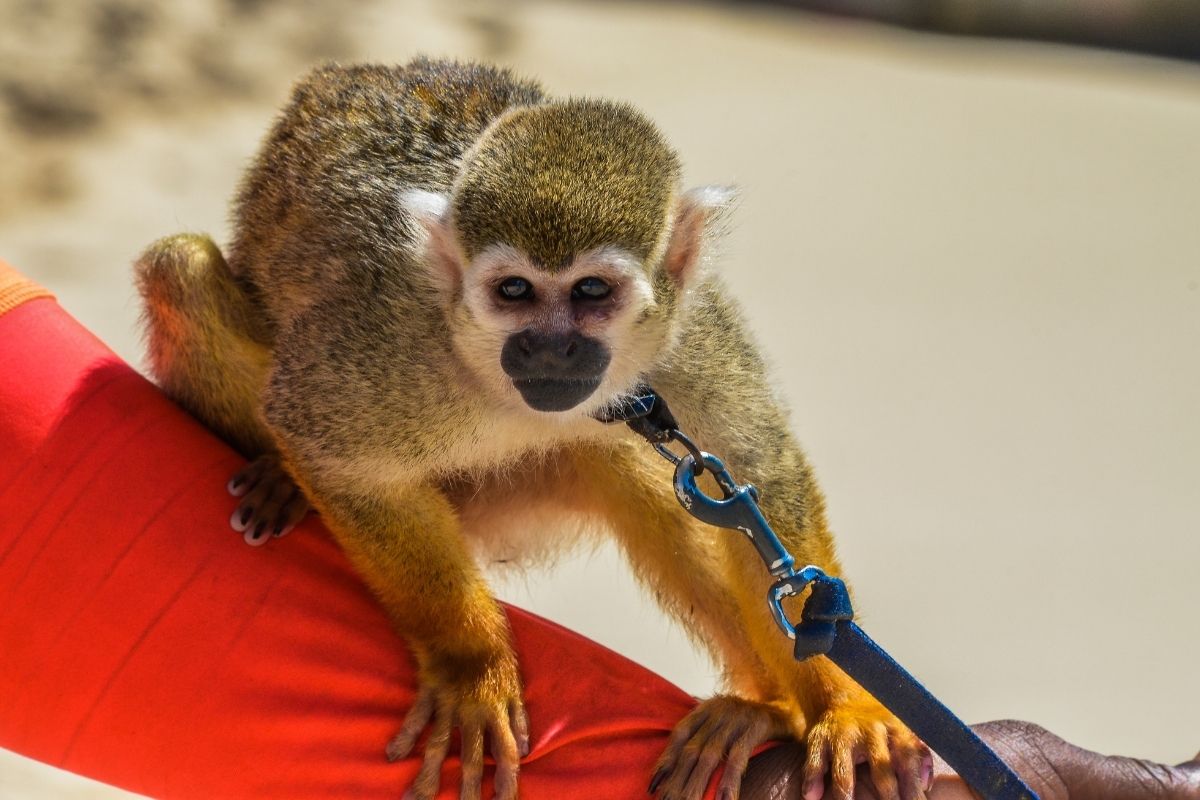 It is illegal to own a pet monkey in many states, and it can be hard to know why. There are different reasons why this is the case. Some people believe that monkeys should not be pets because they could carry diseases or make noise all day long, which would bother neighbors.

Other people think that monkeys should not be pets because they require such high maintenance and care. The following blog post will explain why it is illegal for you to have a pet monkey as well as give tips on where you can get exotic pets if you still want one!

But really, why is it illegal to have a pet monkey?

It is illegal to have pet monkeys because they are wild animals that aren’t suitable for domestication. They can be unpredictable, aggressive, and dangerous even when well-trained, they can transmit diseases to humans, and they are a flight risk that endangers the state’s native wildlife.

But having a pet monkey can also be a very unique and rewarding experience, be it that it comes with its own challenges. To find out why and where it is illegal to have a pet monkey, and what do you need to know before you decide to get one, keep reading.

Why is it illegal to have a pet monkey?

In most places and most states in the US, it is against the law to possess pet monkeys because they are considered by authorities to be untamable wild animals that aren’t suited for domestication.

Even when well-trained, they may be unpredictable, hostile, and deadly, and they can transmit diseases to humans. They pose a flight risk as well as a danger to native wildlife in the state.

Monkey attacks are not uncommon. Monkeys can even attack their owners and cause them serious damage.

There have been many incidents of pet monkeys, especially chimps, attacking, maiming, and even killing their owners.

Even when allowed, it can still be tricky to get them. Many of the states that allow monkeys as pets have complicated application processes and high bonding requirements.

For example, in Florida – where it is legal to have a pet monkey – they have many restrictions. You must be at least 16 years old and have 1,000 hours of volunteer work with monkeys under your belt to acquire a permit to keep primates.

Other states have similar laws on the age and experience you must have to be allowed a pet monkey.

Furthermore, the size of the property where the habitat will be established as well as the construction of the habitat itself will both have specific requirements depending on the state, county, or even the area you live in.

Keep in mind that many jurisdictions and counties have rules restricting the ownership of monkeys, even if no federal ban exists.

Before you decide to keep an exotic pet, you should consult with your local and state regulations on the keeping of exotics.

How to find the laws on keeping pet monkeys?

You should conduct research on the laws in your state concerning monkeys as pets before you acquire a monkey as a pet. You should always thoroughly check the legal requirements of your jurisdiction on a regular basis.

You can find out the laws on owning a pet monkey in each state here.

Here are the states where it’s legal to have a pet monkey:

And here are the states that have clear laws prohibiting the ownership of pet monkeys:

States not on both lists have some kind of restrictions on the ownership of pet monkeys.

Cities and towns may have rules that restrict monkeys, such as macaques. If you’re having difficulties finding an answer at the local level, calling city hall or municipal offices might help.

They may also be able to provide information on where you can contact the office or individual in charge of pet-related rules if there is no law banning monkeys.

Ask your landlord (if you have one)

There may be a restriction in the lease agreement if you are renting a home or apartment. If it’s unclear, contact the landlord or building owner; many homeowners reside in neighborhoods with homeowner associations that may have rules regarding pets. A property owner will be able to tell if they allow flying squirrels, but they may not be aware of local or state laws.

A land owner can’t refuse to let you live in a rental property because of your pet, but they may set rules about what kind of pets it is allowed and how many you are allowed to have.

If the apartment or house has an association that has its own rules, then you should check their guidelines for any possible restrictions.

Contact your city or county clerk for information on local laws (see Resources).

Get permission from the authorities if you are unsure. Don’t proceed with getting a monkey without knowing all of the rules and regulations first! It’s worse to get in trouble for accidentally breaking a law than it is to have no idea that owning monkeys isn’t legal where you live.

link to Can a Karelian Bear Dog Kill a Bear? Karelian Dogs vs. Bears Explained

The Karelian bear dog is a breed of hunting dog that originated in Finland and is still very popular and much loved there. It's said that the breed originates from an ancient breed that's very old...

Continue Reading
link to Why Do Pitbulls Drool? 9 Causes and Solutions