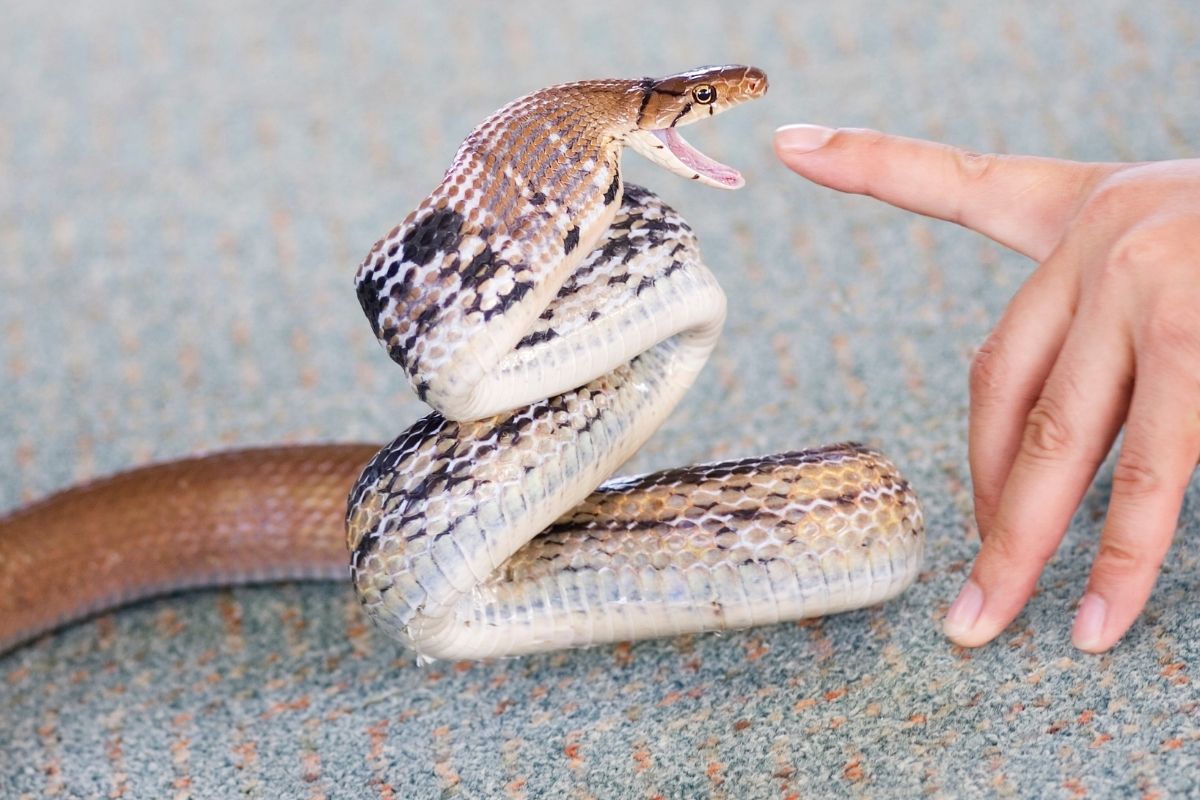 How do you feel about snakes? Do they make your skin crawl or do you think they are fascinating creatures of the wild? Regardless of what you think, there is no denying that the popularity of snakes as pets is exploding right now.

Ever since people learned that they are going to have to stay at home, they started looking to get a pet, but not everyone is ready for the commitment of a high maintenance pet like a dog or a cat, so the low-maintenance snake looks like a great option.

But many people are hesitant of getting a snake as they fear their bites, which can be quite nasty, so where is the truth?

To understand why do snakes bite, how to avoid getting bitten by your snake, what to do in case you are bitten, and which are snakes are going to be the least likely to bite you, keep on reading…

Why Do All Snakes Bite?

Snakes have made incredible progress towards domestication, especially because they’ve been successfully bred for gentleness, with beautiful patterns and color variants. They’ve become endearing and do-able pets as a result.

Breeders, on the other hand, will never be able to breed out a snake’s tendency to bite entirely. This implies that even the most docile snake has a chance of becoming defensive and biting you if it perceives itself as being threatened. Snakes bite everyone; in particular, if they are hungry, irritable, or startled.

Some don’t bite as frequently as others, which is all there is to it. You can learn about these snakes that are less likely to bite their owners here.

Why do snakes bite?

If you feed and handle your snake properly, it is unlikely to bite you. However, if you are going to have the snake for its lifetime, you are almost certainly gonna get bitten.

Every single snake owner I know who has had a snake for more than a few months had to deal with it.

Here’s why they bite.

If you have recently handled prey and you have not washed your hands properly and you still smell even a tad like the prey, the snake will strike thinking you have (or you are) food.

Snakes are carnivorous predators that prey on other creatures. Because snakes are afraid of unfamiliar big animals, such as humans, they will bite you if they aren’t used to seeing you.

To be fair, this is a completely acceptable defense mechanism, because, at the end of the day, the snake is quite small and weak in comparison with most other animals.

This defence mechanism is also quite effective because snakes are primitive animals and will strike without hesitation the moment it feels afraid. That’s why most animals instinctively fear snakes, but dogs don’t, did you know that? You can learn why dogs don’t fear snakes here.

A hungry animal has the right to believe that anything in its path is food. As a result, it may start attacking everything it encounters, such as your hands.

When striking out to capture food from your hands, it may inadvertently bite you.

All living animals can get irritated, including snakes. They are more likely to get irritated if they are feeling unwell, shedding, or are just being moody.

How to avoid getting bitten by your snake?

Although there really is not anything you can do that will guarantee you never get bitten by your snake, there are many things you can do to minimize the risk of this happening as much as possible.

Here are some safety tips for handling your snake to avoid getting bitten:

Okay, now let’s see what you should do in case the worst does happen and you end up getting bitten by the snake

What to do in case of a snake bite

If a snake bites you or bites someone else, you should immediately clean the wound with warm water, disinfect the wound with an antiseptic cleanser, then go to an emergency room right away.

If you have even a slight suspicion that the snake may have been venomous, call 911 or head to the ER immediately and let them handle it.

Will a snake always bite you?

No, not all snakes will bite you. Some friendly snake species will get used to you and will start to trust you which means they are most likely not going to bite you.

This is why it’s important to do your research and find out if the snake has a temperament that suits your needs before purchasing one of these reptiles!

By the way, getting to trust you is the snake’s form of affection towards its owner.

What are the chances of a snake biting you?

Even if we assume the highest estimate from the CDC, which is 8,000 annual snakebites every year, the chances of being bitten are still 40,965 to one.

Do all snakes bite humans?

No, not all snakes bite humans. There are many snake species that will never attack a human and would rather flee from danger than confront it.

On the other hand, there are some venomous snakes whose bites can cause serious harm or even death if not treated immediately with anti-venom so always be aware of your surroundings and what type of snake you are dealing with before taking any risks!