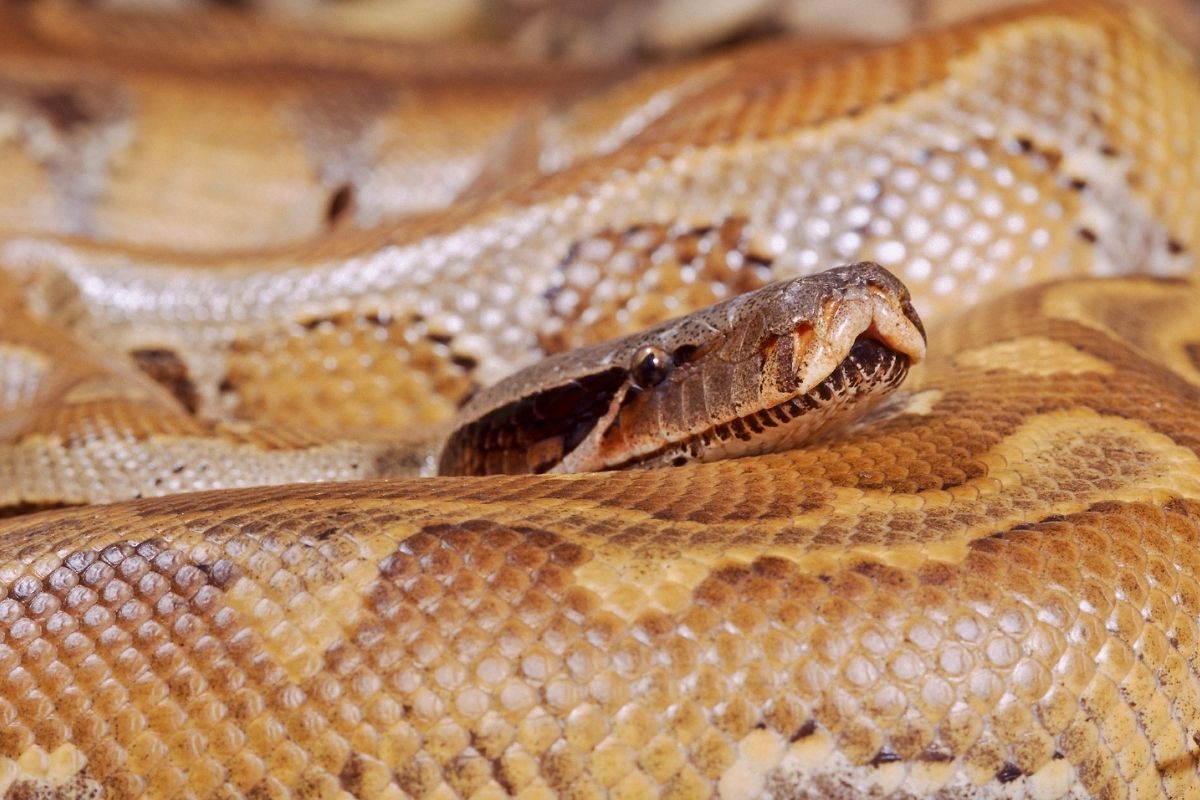 I have heard all kinds of myths about snakes, but to be honest, one of the less intelligent ones I ever heard was that snakes do not have blood. This paints the pictures of snakes as something mysterious, magical, or even evil.

But this is simply not true. So let’s put this question to rest once and for all:

Do snakes have blood? Snakes have blood and their blood is red just like all other animals, and snakes do bleed when hurt and can die from blood loss like other animals. Snakes’ blood color can change slightly within the red spectrum to have a darker or more yellowish tone depending on the hemoglobin levels in the blood.

This change in coloring is also normal, and the reason a lot of people think that snakes do not have blood or have different-colored blood is that the blood – whatever the animal – will usually change color as it spends time outside of the body, so if you see an injured snake with blood on the ground that is not as red as the blood in your own body, that is why.

What color of blood do snakes have?

Scientists believe that snakes, all snakes, have red blood just like all other animals. However, no scientists have gone around sticking all snakes with needles to verify this information, so there is no such thing as a scientific database for the many hues of snake blood. Snakes, like other animals, have hemoglobin in their blood, so it makes sense their blood will be red.

As a result, if oxygen is available, snake blood will generally be red and may become dark red if the oxygen supply is interrupted. Because of the presence of a bile-like chemical in their blood, this is quite rare.

Snakes have blood in their bodies, and if they are cut, the blood will come out. Some snakes, on the other hand, have an amazing capacity to bleed intentionally.

In the scientific community, this condition in which snakes intentionally hemorrhage is known as “autohemorrhaging.” This is also known as reflex bleeding in ordinary usage.

When snakes reflex-bleed, they eject blood, and there are basically two ways this is done.

The ability to produce reflex bleeding is present in three different snakes. These are:

How much blood do snakes have?

Because people have no (actual) use for snake blood, there hasn’t been much research on their blood volume. Their blood isn’t utilized for anything in particular, so they aren’t farmed for it.

However, one particular study has been conducted on gopher snakes and their blood volume. The average blood volume is 52.8 milliliters per kilogram of body weight, according to research. That’s equivalent to around 3.5 tablespoons in total.

Some snakes, particularly those that have autohemorraging abilities, have poisonous blood. They produce toxic chemicals that can hurt their attackers. Snake blood is not hazardous in most cases and is consumed as a delicacy in other countries.

The blood of the Cobra, for example, is a mysterious brew. This has long been regarded as a magical “potion” in Eastern Asia, and it is considered to be a powerful drink to boost virility.

Snake blood is said to be able to cure asthma, diabetes, and a variety of other illnesses. It is not uncommon in China to combine snake blood with rice wine.

Snake blood, according to this research, may be the key to treating heart damage. In humans, an enlarged heart is a major problem. This illness causes cardiac infarctions.

When the heart is working harder, it gets larger. As a result, this expansion causes scar tissue and lowers the heart’s ability to absorb nutrients.

After a meal, Burmese pythons exhibited an expansion of the heart, according to researchers. However, there was no problem with the growth in size of the heart. The heart grows twice as big and pumps more recently digested food into their body more quickly as a result of this enlargement.

The expanded heart gave the heart the ability to process fats more quickly and enhanced metabolism. As a result, snakes have the ability to oxidize cholesterol, which humans can benefit from.

The most amazing thing is that while the mice’s hearts grew in size, no scars were produced as a result of this study. This indicates that snake fatty blood plasma may help repair damaged hearts. The next stage in the research is to see if snake blood has any positive effects on mice suffering from heart ailments.

So, while drinking snake blood probably does not have any magical benefits, we may be able to use it in other ways for medicinal purposes.

Snakes are called cold-blooded because they are ectoetherms which means their blood can’t generate heat, and so their bodies can’t regulate their body’s temperature.

Since snakes can’t regulate their body temperature, they need to rely on their environment for both the heat their bodies need to function and the cooling needed to get rid of excess heat.

This is why snakes can’t survive in the cold without a heat source. You can learn more about this in my post on how long can snakes survive without heat here.

While we do not know a lot about snakes, we do know that they have blood, and their blood is red. Snakes bleed when injured just like any other animal, and blood loss can be traumatic or even fatal for the snake body.

Snake blood is different from our blood, for example, it can’t keep them warm like in mammals, but according to recent research, their blood may have some keys to treating or curing cardiovascular diseases and problems in humans.

What animal has no red blood?

There are a few animals that don’t have red blood, including octopuses, horseshoe crabs, brachiopods, new guinea’s green-blooded skins, and the crocodile icefish.

What animals have no blood?

All large animals, including mammals, reptiles, and birds have red blood. Bloodless animals include flatworms, nematodes, and cnidarians (jellyfish, sea anemones, and corals), which do not possess a circulatory system. Their body cavity has no lining or fluid within it.